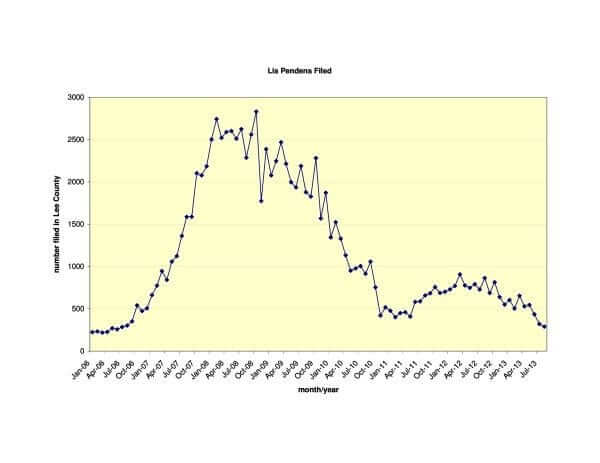 Where are the foreclosures in Cape Coral Lee County?  Take a look at this chart and you tell me….

These are the Lee County Lis Pendens filed through September 2013………

First, what is a lis pendens?  A lis pendens is a written notice that a lawsuit has been filed with the courts concerning real estate. You could kind of call it…one of the first indicators of a possible foreclosure.

Everyone’s talking about foreclosures.  Are they slowing down?  Will there be a new wave?

It is important to keep in mind that not every lis pendens filing will turn into a foreclosure.   I’ve been watching the overall numbers for a quite a while now…waiting for a sign.  You tell me what you see……

Looks like we are almost back to normal (if there is such a thing).  Lis Pendens  filed now are at the same rate as they were in 2006.  So much for shadow inventory….

If you would like me to send you more figures and graphs….drop me an email at deb@CapeDeb.com